The Interview / This Is The End 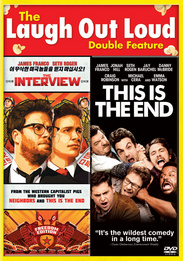 Dave Skylark (James Franco) and his producer Aaron Rapaport (Seth Rogen) run the popular celebrity tabloid TV show Skylark Tonight. When they discover that North Korean leader Kim Jong-un is a fan of the show, they land an interview with him in an attempt to legitimize themselves as journalists. As Dave and Aaron prepare to travel to Pyongyang, their plans change when the CIA recruits them, perhaps the most unlikely candidates, to take out Kim Jong-un. ,THIS IS THE END follows six friends trapped in a house after a series of strange and catastrophic events devastate Los Angeles. As the world unravels outside, dwindling supplies and cabin fever threaten to tear apart the friendships inside. Eventually, they are forced to leave the house, facing their fate and the true meaning of friendship and redemption.

The Interview
This is the End