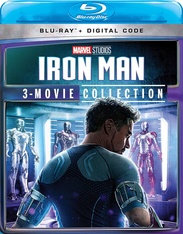 Iron Man
After surviving an unexpected attack in enemy territory, jet-setting industrialist Tony Stark builds a high-tech suit of armor and vows to protect the world as Iron Man. Straight from the pages of the legendary comic book, Iron Man is a hero who is built - not born - to be unlike any other.

Iron Man 2
Robert Downey Jr. returns as Tony Stark, the wealthy playboy whose exploits as Iron Man are now public knowledge after his admission at the close of the first film. In the follow-up, Stark is pitted against his Russian arch nemesis, Whiplash (Mickey Rourke), and corporate rival Justin Hammer (Sam Rockwell).

Iron Man 3
The studio that brought you Marvel's The Avengers unleashes the best Iron Man adventure yet with this must-own, global phenomenon starring Robert Downey Jr. and Gwyneth Paltrow. When Tony Stark/Iron Man finds his entire world reduced to rubble, he must use all his ingenuity to survive, destroy his enemy and somehow protect those he loves. But a soul-searching question haunts him: Does the man make the suit... or does the suit make the man?