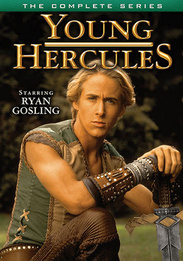 This prequel series to the smash hit Hercules: The Legendary Journeys explores the dawn of an ancient age of light and darkness as the half-god, half-man Hercules (Ryan Gosling, The Notebook) - alongside his friends, Prince Jason (Chris Conrad, Mortal Kombat Annihilation) and Iolaus (Dean O'Gorman, The Hobbit Trilogy) - struggles to find his place in the world and learns what it means to be a hero.