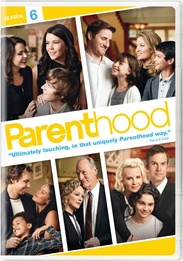 Get ready to say goodbye to the Braverman family in the sixth and final season of Parenthood, the gripping series lauded by critics and beloved by viewers. The tightknit siblings turn to each other as they face uncertain futures: Sarah considers her relationship with Hank, Adam and Crosby struggle to keep The Luncheonette afloat, and Julia and Joel ponder reconciliation. But the greatest concern for everyone is the health of Zeek, the adored and booming patriarch who has always led their clan with vigor... until now. From executive producers Ron Howard, Brian Grazer, and Jason Katims come the final episodes filled with the laughter, wit, and tears that has made the show an indelible part of television history, now available back-to-back and uninterrupted!