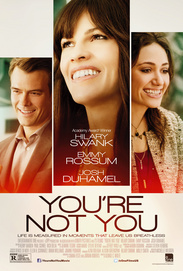 Academy Award® winner Hilary Swank (Conviction, Million Dollar Baby) and rapidly rising star Emmy Rossum ("Shameless")intertwine in You're Not You, a surprisingly funny, defiantly unsentimental and starkly moving portrait of a high-stakes friendship between two women  one literally in need of a voice, the other discovering the full power of hers.

Kate (Swank) is a suave, successful classical pianist just diagnosed with ALS (commonly known as Lou Gehrig's Disease). Bec (Rossum) is a brash college student and would-be rock singer who can barely keep her wildly chaotic affairs, romantic and otherwise, together. Yet, when Bec takes a job assisting Kate, just as Kate's marriage to Evan (Josh Duhamel) hits the skids, both women come to rely on what becomes an unconventional, sometimes confrontational and fiercely honest bond. As meticulous, willful Kate begins to rub off on whirlwind, spontaneous Bec  and vice versa  both women find themselves facing down regrets, exploring new territory and expanding their ideas of who they want to be.

Rated R for some sexual content, language and brief drug use.