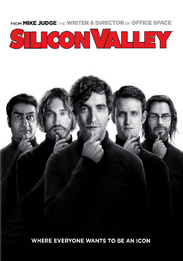 From the offbeat mind of Alec Berg and Mike Judge Silicon Valley is an all-new comedy series set in the high-tech gold rush of modern Silicon Valley, where the people most qualified to succeed are the least capable of handling success. Starring a talented ensemble of young comic actors and veterans, Silicon Valley charts the rising fortunes of Richard, an introverted computer programmer who lives in a "Hacker Hostel" start-up incubator along with his friends Big Head, Gilfoyle, and Dinesh.