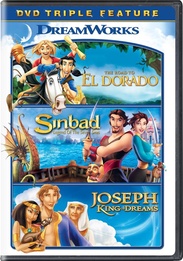 The Road to El Dorado Get ready for an exhilarating ride of a lifetime, with Tulio and Miguel-and their hilarious horse Altivo-as they set sail, map in hand, in search of golden treasure in DreamWorks' all-star animated adventure. Sinbad: The Legend of the Seven Seas Join our swashbuckling hero Sinbad, his loyal (but drooling) canine sidekick Spike, and the daring princess Marina as they battle the Goddess of Chaos and her mischievous monsters to save the life of his best friend. Joseph: King of Dreams From the filmmakers who brought you The Prince of Egypt comes an epic, inspiring musical adventure about a boy (voiced by Ben Affleck) with the extraordinary gift of seeing the future through his dreams.

Joseph: King Of Dreams
The Road To El Dorado
Sinbad: Legend Of The Seven Seas