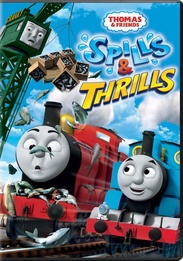 The Island of Sodor is always bustling with activity, yet when the engines try to be "Really Useful" they often find themselves in some messy muddles! James tries to prove he's not afraid of the dark, or too vain to haul smelly fish, but when he pulls the nighttime Kipper Express he gets more than he bargained for! Stephen's need for speed and Salty's need to impress sends them both into some sticky, slippery situations. Hiro shows Diesel that nice engines do finish first and Sir Topham Hatt shows you can't cry over spilled milk ... twice! It's full steam ahead for Spills & Thrills on Sodor!