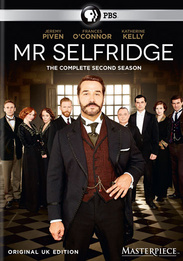 Much has changed since Selfridges first opened its doors. Five years later, Europe is on the brink of war and London is enjoying one last defiant period of hedonism and decadence. Having rocked the retail world with his pioneering new store, Mr. Selfridge (Jeremy Piven) now has his sights set on joining the establishment and rebuilding his family life. His desperate attempts to win back estranged wife Rose (Frances O'Connor), are hindered by her friendship with Delphine Day, the daring and extravagant owner of a fashionable London nightclub. Tensions are also running high on the shop floor as Agnes is back from Paris, chic and successful. Not everyone is thrilled by her newfound confidence and by the sudden reappearance of her old ally Henri Leclair, who has mysteriously returned from America.