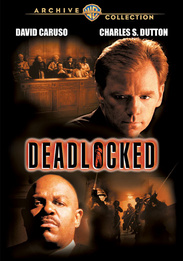 Equal justice. Unequally dispensed. What would you do if it happened to your child? What Jacob Doyle does when his estranged son is wrongly convicted of murder is kidnap the jury at gunpoint and issue a single demand: prosecuting D.A. Ned Stark has 24 hours to uncover the evidence that will free the youth...or jurors will die. Powerful themes of justice and family combine with split-second suspense when David Caruso and Charles S. Dutton are Deadlocked in a nerve-snapping hostage crisis. Dutton (A Time to Kill) plays Doyle, a heretofore law abiding father who risks it all for his son. And Caruso (Proof of Lies) is Stark, the D.A. placed into a race-against-time emergency that tests his will, jeopardizes his career and holds a mirror to Stark's relationship with his own troubled son.