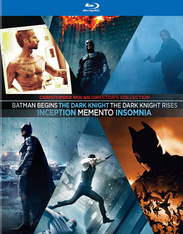 BATMAN BEGINS After traveling the world seeking the means to fight injustice, Bruce Wayne returns to Gotham City and unleashes his alter ego, Batman, who uses strength,intellect and high-tech weaponry to fight evil. THE DARK KNIGHT Batman continues his war on crime with the help of Lt. Jim Gordon and Harvey Dent as rising criminal mastermind The Joker unleashes anarchy, forcing Batman closer to crossing the line between hero and vigilant. THE DARK KNIGHT RISES Eight years after Batman vanished into the night as a fugitive, things change with the arrival of a cunning cat burglar and the emergence of Bane, a ruthless terrorist who drives Bruce Wayne out of exile. INCEPTION Fugitive Dom Cobb is the best there is at extraction: stealing secrets from a dreamers mind. Now he has a chance at inception  planting an idea into the subconscious and success may mean his ticket home. MEMENTO Ever since the night his wife was murdered, Leonard has suffered from a bizarre disorder: the inability to form new memories. As he seeks vengeance, his disorder sinks him into an abyss of uncertainty and danger INSOMNIA LAPD detective Will Dormer heads a murder case in Nightmute, Alaska ,where his sleep is disrupted by an ever-shining sun and guilt over a crime that may be a fi gment of his increasingly unstable consciousness.