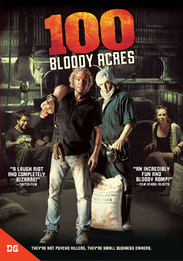 In 100 BLOODY ACRES, brothers Reg and Lindsay Morgan are struggling to keep their organic blood and bone fertilizer business in motion. Their secret "recipe" for success (using dead car crash victims in their product) was a huge boon to business, but lately supply has been gravely low. Months have passed since their last find, and an important new customer is now waiting on a delivery. When junior partner Reg (Damon Herriman of Justified) stumbles upon 3 travelers stranded on a remote country road, he cooks up a radical solution to their problem, and a way of finally gaining the respect of his bossy big brother (Angus Sampson). But when Reg starts to fall for Sophie, one of the intended victims, things get complicated.