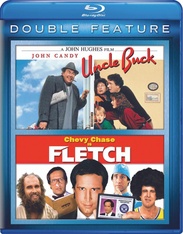 Uncle Buck: John Candy stars in Uncle Buck, the outrageous comedy written and directed by John Hughes (The Breakfast Club). As an idle, good-natured bachelor, Uncle Buck is the last person you would think of to watch the kids. However, during a family crisis, he is suddenly left in charge of his nephew and nieces. Unaccustomed to suburban life, fun-loving Uncle Buck soon charms his younger relatives Miles and Maizy with his hefty cooking and his new way of doing the laundry. His carefree style does not impress everyone though - especially his rebellious teenage niece, Tia, and his impatient girlfriend, Chanice. With a little bit of luck and a lot of love, Uncle Buck manages to surprise everyone in this heartwarming family comedy. Fletch: Chevy Chase is at his hilarious best as Irwin Fletch Fletcher, a newspaper reporter who changes his identity more often than his underwear. While working on a drug exposé, he stumbles onto a scam that gets him up to his byline in murder, police corruption and forbidden romance.