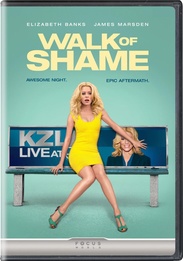 Written & directed by Steve Brill (WITHOUT A PADDLE, MR. DEEDS), WALK OF SHAME stars Elizabeth Banks as an aspiring reporter whose dreams of becoming a network news anchor are compromised after a one-night stand with a handsome stranger (played by James Marsden) leaves her stranded in downtown Los Angeles without a phone, car, ID or money  and only 8 hours to make it to the most important job interview of her life.