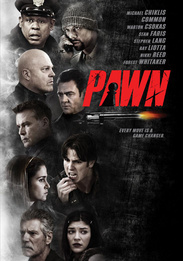 Academy Award® winner Forest Whitaker and Golden Globe® winner Michael Chiklis reunite for the first time since "The Shield" for the most gripping crime thriller of the year: An all-night diner. A cop walks in on a robbery in progress. But what happens next  and what happened just before  will change everything you think you know. Now the building is surrounded. There are fingers on every trigger. And one very intense hostage situation is about to take some extremely shocking twists. Common, Stephen Lang, Nikki Reed, Jessica Szohr and Ray Liotta co-star in this shotgun blast of a drama about last chances, double-crosses and a deadly game of dirty deals where anyone can be a PAWN.