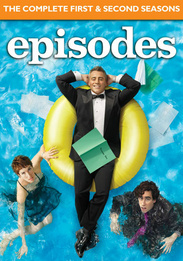 Husband and wife writing team Sean and Beverly can't wait to bring their successful British television series across the pond to make it big in America. But in true Hollywood fashion, it quickly becomes a laughable, clichÃ©d sitcom - starring none other than Matt LeBlanc. Matt not only messes with their beloved show, he rocks the foundation of their relationship. So now, even if they survive the absurdity of show business, will their marriage survive Matt LeBlanc? Don't miss a single episode of EPISODES on DVD!