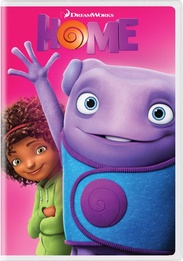 From the creators of How to Train Your Dragon and Shrek comes the hit comedy of the year featuring the superstar voice talents of Jim Parsons, Rihanna, Steve Martin and Jennifer Lopez. When Oh, a lovable misfit from another planet, lands on Earth and meets a teenage girl named Tip, the two unlikely friends embark on the greatest journey of all time...the journey Home.

Rated PG for mild action and some rude humor.