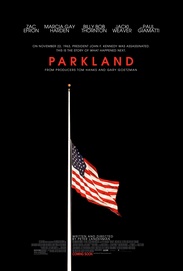 Recounting the chaotic events that occurred in Dallas, Texas on November 22, 1963, PARKLAND weaves together the perspectives of a handful of ordinary individuals suddenly thrust into extraordinary circumstances: the young doctors and nurses at Parkland Hospital, Dallas' chief of the Secret Service, an unwitting cameraman who captured what became the most watched and examined film in history; the FBI agents who nearly had the gunman within their grasp, the brother of Lee Harvey Oswald - left to deal with his shattered family, and JFK's security team - witnesses to both the president's death and Vice President Lyndon Johnson's rise to power over a nation whose innocence was forever altered.

Rated PG-13 for bloody sequences of ER trauma procedures, some violent images and language, and smoking throughout.