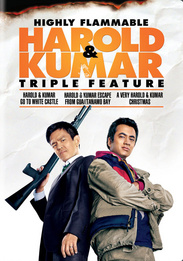 To satisfy a serious case of the munchies, Harold and Kumar set out on a quest that turns into a hilarious all-night adventure filled with dangerous detours and wildly twisted characters in Harold & Kumar Go to White Castle. In Harold & Kumar Escape from Guantanamo Bay , the guys are mistaken for terrorists and become Americas most wanted  and most wasted! The guys reunite in A Very Harold & Kumar Christmas when a prize Christmas tree goes up in smoke in this dope holiday adventure.