The Rise and Rise of Michael Rimmer 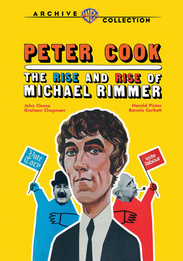 The Rise and Rise of Michael Rimmer is comedy and comedy, a quirky skewering of sex, the advertsing business, media, politics, the clergy, ale and you name it and featuring a motley array of talents -- we'll name them: Bedazzled and Beyond the Fringe's Peter Cook, Monty Pythonites John Cleese and Graham Chapman, ever-reliable comedy veterans Denholm Elliott and Dennis Price, playwright Harold Pinter and more. At the center of the gleeful goings-on is Rimmer (Cook), who begins a career at a marketing research firm and manipulates his way into upward mobility. He gets the girl. He gets the wealth and acclaim. He gets the presidency of England, a position created just for him. You get the laughs. If offbeat British '60s-era fare is your cuppa, drink up.