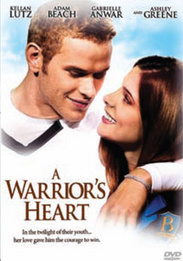 In shock and denial over his Marine father's death in combat, high school lacrosse star Conor Sullivan (Kellan Lutz) starts acting out in self destructive ways until he's kicked off the team and sent to a wilderness lacrosse camp run by his dad's combat buddy (Adam Beach). Strengthened by the support and understanding of his new found love (Ashley Greene) and though a deep understanding of the game and its Native American roots, he opens his eyes to the true meaning of sportsmanship, love and life.