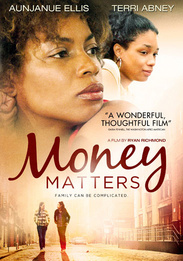 A moving and intimate film that follows Monique "Money" Matters (Terri Abney) caught at the brink of adolescence. Her relationship with her mother Pamela Matters (Aunjanue Ellis: RAY, MEN OF HONER), is far from stable and depicts the struggle between a young mother and daughter who both come of age...together. Sharp and candid dialogues blur the roles of parent and child, revealing a family secret magnified by pain and years of regret. Money's daily routine; a three-bus commute to the Catholic school she attends, far from her dilapidated neighborhood, to another world where she feels just as uncomfortable. When she befriends a neighborhood girl who seems to understand her, their friendship develops in ways that push boundaries.