Air Force One / In The Line Of Fire 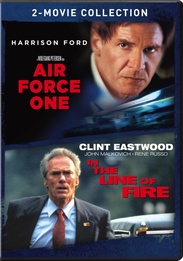 In The Line Of Fire
A gripping, gut-wrenching thriller that delivers suspense in almost unbearable doses, IN THE LINE OF FIRE showcases Clint Eastwood at his finest. In a performance that won universal acclaim, Eastwood stars as Frank Horrigan, a veteran Secret Service agent haunted by his failure to protect John F. Kennedy from assassination. Thirty years later, he gets a chance to redeem himself when a brilliant psychopath threatens to kill the current president and take Horrigan with him. Taunting him by phone and tantalizing him with clues, the assassin (John Malkovich) lures Horrigan into an electrifying battle of wits and will that only one man can survive. Co-starring Rene Russo as Horrigan's risk-taking Field Chief, IN THE LINE OF FIRE is a high-wire balancing act of searing suspense, explosive action and surprising romance.

Air Force One
A U.S. led commando raid in Kazakhstan captures a renegade Russian leader, General Radek, and James Marshal, the President of the United States, declares that the U.S. will no longer tolerate nor negotiate with any terrorist group. No sooner does he make that statement then a group of Radek supporters, led by Ivan Korshunov and assisted by secret service agent Gibbs, hijack Air Force One. Their demands are that Radekbe released from prison or else, they'll execute a prisoner every half hour. What they didn't count on is that Marshall didn't leave the plane in the jettisoned escape pod, but instead remained on board. Back in Washington, the Vice President must decide whether to deal with Korshunov's demands while thwarting Secretary of Defense Walter Dean's attempts at usurping executive power. As Marshall makes his way through the plane taking out the terrorists, he must deal with saving the lives of his wife, and twelve-year old daughter, other White House workers,and with the damaged executive plane that's heading for a crash.

Air Force One
In The Line Of Fire