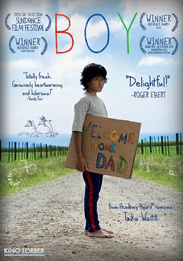 The year is 1984, and on the rural East Coast of New Zealand "Thriller" is changing kids' lives. Inspired by the Oscar-nominated Two Cars, One Night, Boy is the hilarious and heartfelt coming-of-age-tale about heroes, magic and Michael Jackson.

BOY is a dreamer who loves Michael Jackson. He lives with his brother ROCKY, a tribe of deserted cousins and his Nan. Boy's other hero, his father, ALAMEIN, is the subject of Boy's fantasies, and he imagines him as a deep sea diver, war hero and a close relation of Michael Jackson (he can even dance like him). In reality he's "in the can for robbery".

When Alamein returns home after 7 years away, Boy is forced to confront the man he thought he remembered, find his own potential and learn to get along without the hero he had been hoping for.