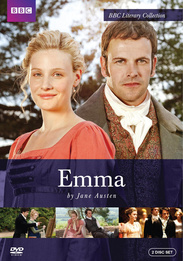 Beautiful, clever, and rich Emma Woodhouse is convinced she is good at matchmaking after her older sister and her governess both marry suitable husbands. No matter that as Mr Knightley drily observes, in reality, she had nothing to do with these relationships. Yet Emma, certain of her talents, plays a dangerous game as she persuades her new friend, the young, pretty and socially inferior Harriet to reject an advantageous marriage proposal to a local farmer in favour of dashing Mr Elton. So begins a story which challenges Emma's naivety, her social preconceptions and her relationship with Knightley. Fresh and funny, this perceptive adaptation, featuring a stellar cast, brings Jane Austen's comic masterpiece to life.