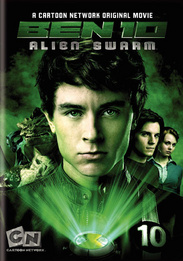 THE ALIEN SWARM IS UPON US! Our world is threatened with an imminent invasion from a swarming alien menace. And there is only one hero brave enough, smart enough and tough enough to fight back - Ben Tennyson! But when Ben teams up with an outsider, he breaks rank with Gwen, Kevin and Max and risks losing against the toughest enemy he has ever faced. The stakes are high and the action is intense as Ben fights to protect our planet from the Alien Swarm!