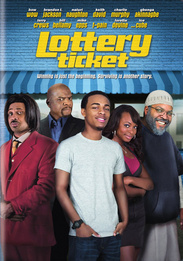 Kevin Carson (Bow Wow) a young man living in the projects, is just an ordinary guy...until he wins $370 million in the Mondo Millions Lottery.

The bad news is, the lottery claim office is closed for the long Fourth of July weekend, so, before he can collect his prize, Kevin is going to have to figure out how to keep a lid on his good fortune and survive the next three days.

As news of his windfall spreads through the community like a grass fire, Kevin quickly discovers the good, the bad and the ugly in his closest friends and neighbors. Girls who could never be bothered before start chasing him down. Everyone wants a piece of him--including the reverend, the local loan shark and one very threatening recent parolee won't take no for an answer. On edge and on the run, he even begins to question the intentions of his best friend, Benny (Brandon T. Jackson).

He also starts to realize the power he holds in his hands and what this lottery ticket could really mean to him, his future, and the community.

It's funny what people will do when money is involved.

Rated PG-13 for sexual content, language including a drug reference, some violence and brief underage drinking.