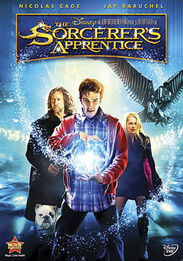 Balthazar Blake (Nicolas Cage) is a master sorcerer in modern-day Manhattan trying to defend the city from his arch-nemesis, Maxim Horvath (Alfred Molina). Balthazar can't do it alone, so he recruits Dave Stutler (Jay Baruchel), a seemingly average guy who demonstrates hidden potential, as his reluctant protÃ©gÃ©. The sorcerer gives his unwilling accomplice a crash course in the art and science of magic, and together, these unlikely partners pit their powers against those of the fiercest-and most ruthless-villains of all time. It'll take all the courage Dave can muster to survive his training, save the city and get the girl as he becomes "The Sorcerer's Apprentice.