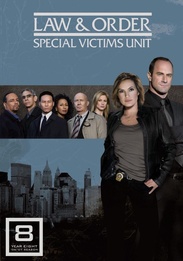 Compelling, award-winning and provocative, Law & Order SVU tracks down some of its most stunning sexual crimes ever in all 22 hard-hitting episodes from the eighth year. Reunite with Primetime Emmy® Award and Golden Globe® winner Mariska Hargitay and Primetime Emmy® Award nominee Chris Meloni as they delve deeper into emotionally raw cases ripped from todays headlines. Along for the ride is newcomer Connie Nielsen, who joins the force as Stablers new partner. From producer Dick Wolf comes more of the spellbinding show where victims can also be perpetrators and theres often a blurry line between right and wrong.