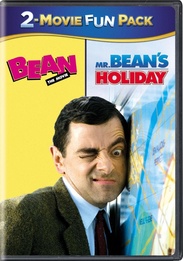 Bean The clumsy, crazy, wacky Mr. Bean is sent on a mission to escort a famous painting to its new gallery. When something terrible goes wrong, there is only one man who has the power to put it right. The only problem is... that man is Bean! Mr. Beans Holiday Mr. Bean can't believe his luck when he wins a camcorder and an all-expense-paid vacation to France. But during his train journey, he falls face first into a series of mishaps, all of which are caught on camera to ensure his own makeshift entry into the Cannes Film Festival!