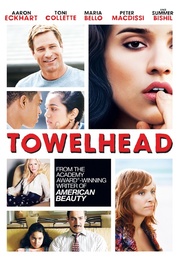 "Who are you?" Jasira Maroun's strict, Lebanese-born father asks. Jasira isn't sure. She's a typical 13-year-old. And an Arab-American who's anything but typical to folks in her Houston suburb. She's drawn to a boy at school. And to a hunky, married Army reservist neighbor. She's curious about sex. And clueless about relationships. Then all these "who are you"s collide in a series of fateful, emotional, frequently funny events, and Jasira's life changes forever. Oscar *- and Emmy - winning filmmaker Alan Ball and a fine cast headed by Aaron Eckhart, Toni Collette, Maria Bello and newcomer Summer Bishil combine talents in a fresh, honest coming-of-age story. Who is Jasira? The answer -- and answers -- may surprise you.

Rated R for strong disturbing sexual content and abuse involving a young teen, and for language.