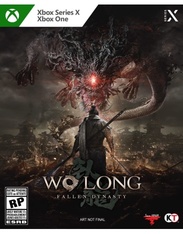 Above a Darkened Kingdom, a Dragon Rises! The next great action game from Team NINJA, the studio behind NINJA GAIDEN and Nioh! Wo Long: Fallen Dynasty follows the dark fantasy adventure of a nameless militia soldier fighting for survival in a Three Kingdoms land infested by demons. Fight off deadly creatures and enemy soldiers using the swordplay of the Chinese martial arts, overcoming the odds by awakening the true power from within.

The Masocore Dream Team - A joint creation by Team NINJA producers Fumihiko Yasuda (Nioh) and Masaaki Yamagiwa (Bloodborne) Live by the Sword - Renowned for ruthless strikes that change the tide of battle in a flash, sword practitioners of the Chinese martial arts gracefully change pace as they shift between offensive and defensive maneuvers Fight in a chaotic Three Kingdoms setting against an onslaught of the supernatural Discover True Power - Defeat deadly enemies to boost morale and awaken the power from within - Overcome adversity through unique new strategies, including battle styles based on the Five Phases